After canoe/kayak trip in the Loxahatchee, it was time to cool off in the Atlantic Ocean. 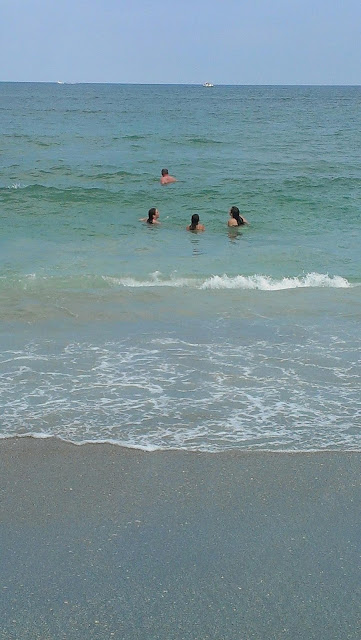 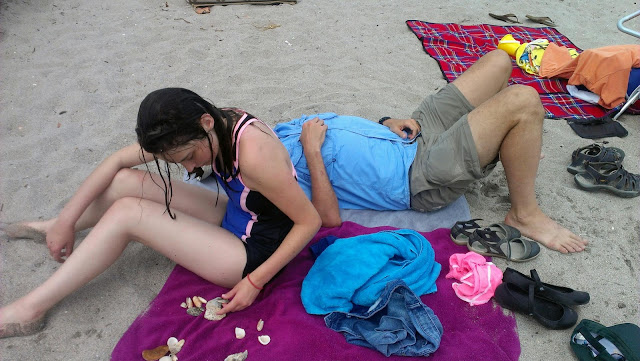 Today's plan is for an all day canoe trip down the Loxahatchee River.

The girls spent the today at a water park with Fowler, it was a Daddy Date! When I asked how it was, Janele spent twenty minutes describing all the rides, listing her favorites and why, comparing it to other parks we've visited. When I turned to Thia for her input, she said, "I didn't like any of it. You should only send me there when I am bad."

I see what you are getting at there, Thia. Nice try...

Monday was a funfilled day. We had friends coming to central Florida for their Spring Break, so the girls and I drove up to meet them, and spend a day at the Kennedy Space Center. I may have been more excited than the girls about the rockets, but we were all excited to see Erik and Mark and their girls! Thia, Janele,Ceci, and Liv have all been great friends since they met. When these four girls get together, it is like the adults could all leave for the weekend, and know they'd just have a blast together all weekend. So yes, we were excited.

Their flight arrived Sunday evening. At 8 AM on Monday, Ceci was knocking on our door so they could all take a quick dip in the hotel pool before heading out. Thia does not normally agree to getting up any earlier than she absolutely has to, but for Ceci, she even had a smile.

After they swam, we were ready to get a quick breakfast, and go see a space shuttle. I had the priveledge of driving all 4 girls in my car, which meant I got to hear rousing renditions of all the latest hits popular with the 'tween set.

We finally arrived at the Kennedy Space Center, and off we went, wandering through the Rocket Garden, then in to see the Space Shuttle Atlantis. The girls crawled into the nose cone of one of the first manned rockets to go into space, went on the launch simulator, and played a live action version of Angry Birds with large slingshots (to learn about trajectory?). Some things were more exciting than others, but it was a great day, spent with great friends!

...More on the West Coast


Of course, we did more than visit the beach while in Tampa. Our visit included some dear friends whom we haven't seen in way too long. We stayed with Kristen, from my high school days, and her wife, Natalie. I hadn't actually seen them in probably more than two years, and they hadn't seen the girls in so many more! It was probably shortly after we moved to NY, so the girls were much younger. Sure, we send notes, call, email and text, but I was reminded how that lacks so much in comparison to visiting. That face to face time, I don't think it can be replicated. So we had a grand time, catching up, and making new memories. 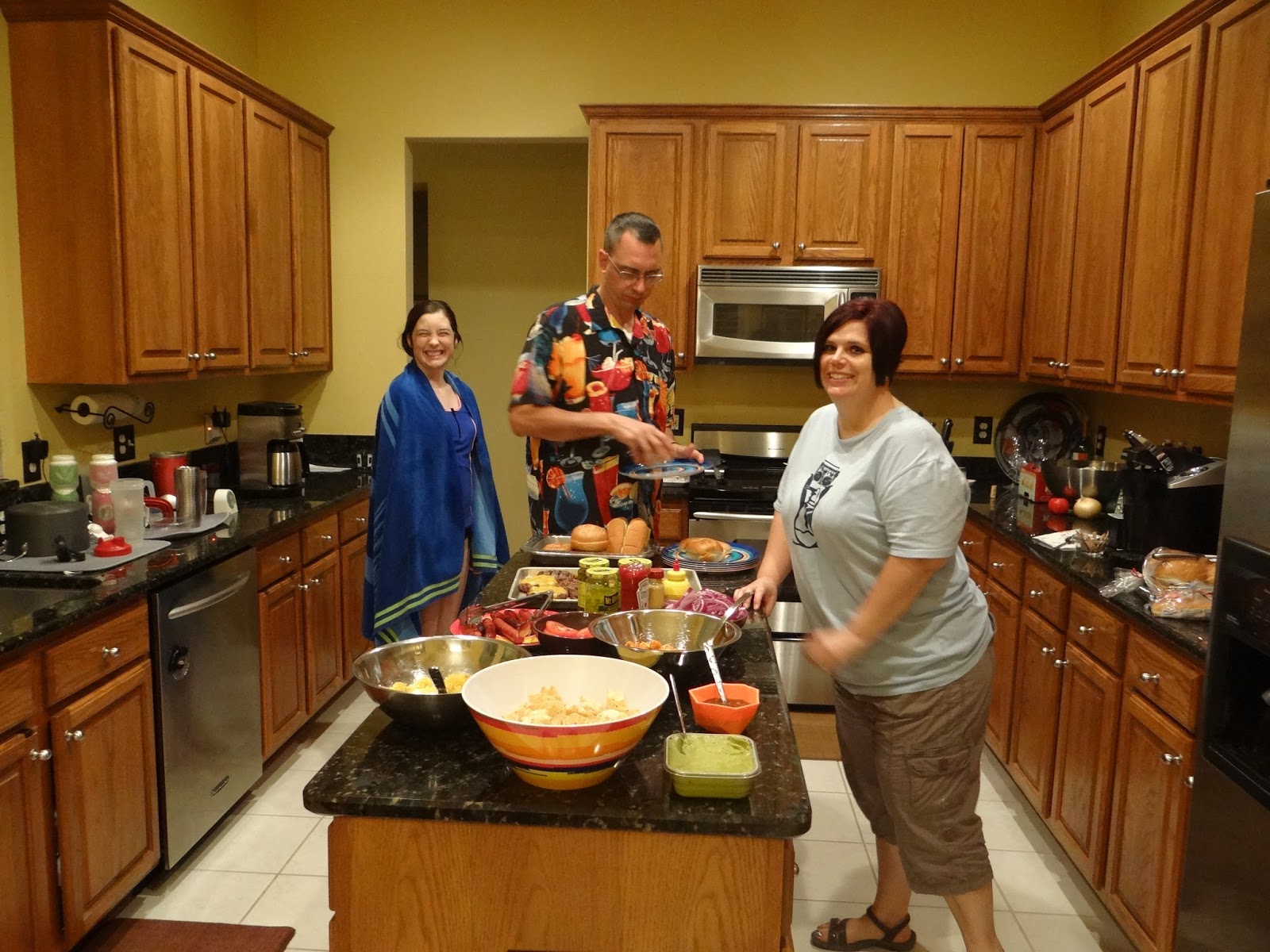 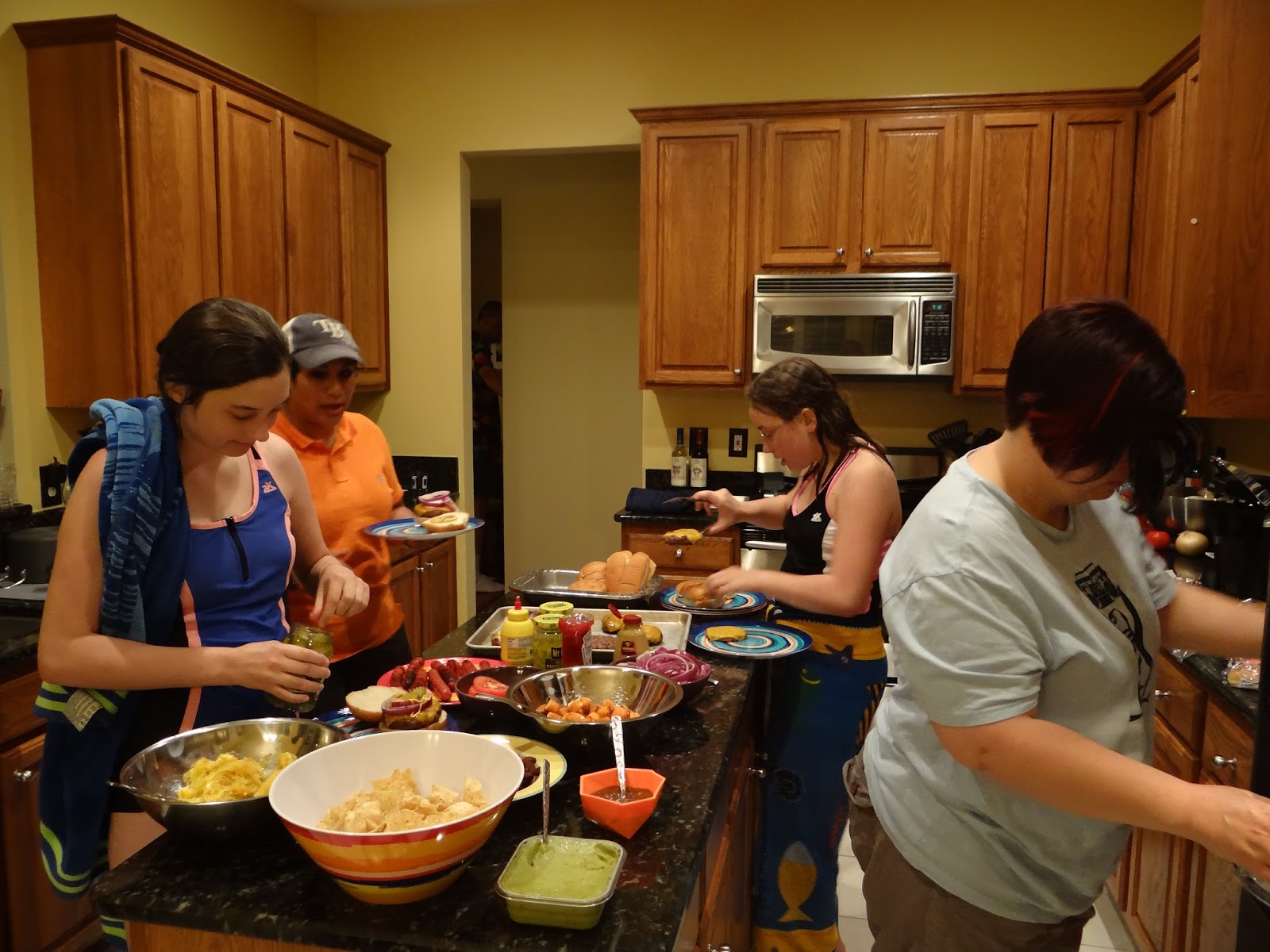 A bonus, is that Janele got to connect with a good friend from school in NY. Akira and her mom had moved down this way a year and a half ago, and though Janele got to see her during the summer, she has missed her very much and was very excited to see her. Those two had a blast! Most of their time at the house was spent in the pool, I am surprised we did not send Akira home a prune!
﻿               We stayed for a long weekend, but it went by in a flash! Aside from the mandatory visit to Clearwater Beach, we took in some local entertainment. We had a great time visiting the Gasparilla Festival of the Arts. I knew nothing of this festival, and was amazed at what I saw. There was art of every kind here. Artists were judged, there were prizes, and it turns out a lot of the art in my friends' house is by artists they found at this festival, it is pretty well known.
We wandered through the rows of tents, and everyone found a favorite. I thought the Kid's Art Tent would be filled with art by local children, perhaps from schools. Nope. It was full of art that had been donated by the various artists, and only children were allowed into this tent. All of the items were marked at child friendly prices. It is a fundraiser for the organization, and the idea is to let the kids decide what they like, on their own, and let kids purchase what they really want. I was impressed with what Thia and Janele chose. They were each spending their own money, not mine: Janele got herself a pair of copper earrings, and Thia bought two pieces of wall art that she plans to use to decorate her room (once she has one). Afterward, they sought out the artists whose pieces they bought, and got to talk to them about their art. What a great experience!
I saw a lot of art I would love to have, both decorative, and functional. But I do not have a home at the moment, so did not buy anything. However, this would be a great incentive to make a visit to the Festival next year, and bring home something great. It just so happens to fall in one of the coldest months in NY, so that is another reason!
Next was the Strawberry Festival in Plant City. It was like so many of the fairs we have been to over the years (Altamonte, South Florida), but strawberry themed. I did not see any strawberry beer, but we got some awesome strawberry shortcake. Akira joined us for this one, and the three girls spent the day riding as many rides as they could. It was a good thing we got there early, because as the day went on, it just got more and more crowded. By the time we had seen all the vendors, and booths and 4-H exhibits, and the girls had ridden all the rides they wanted, the lines were getting long. There were so many people in the confined space that texts were not getting through. That is too crowded for me, and thankfully, for the rest of us as well. So we headed back to the house for more pool time. It was a great way to refresh from all the dust and the heat of the fair. 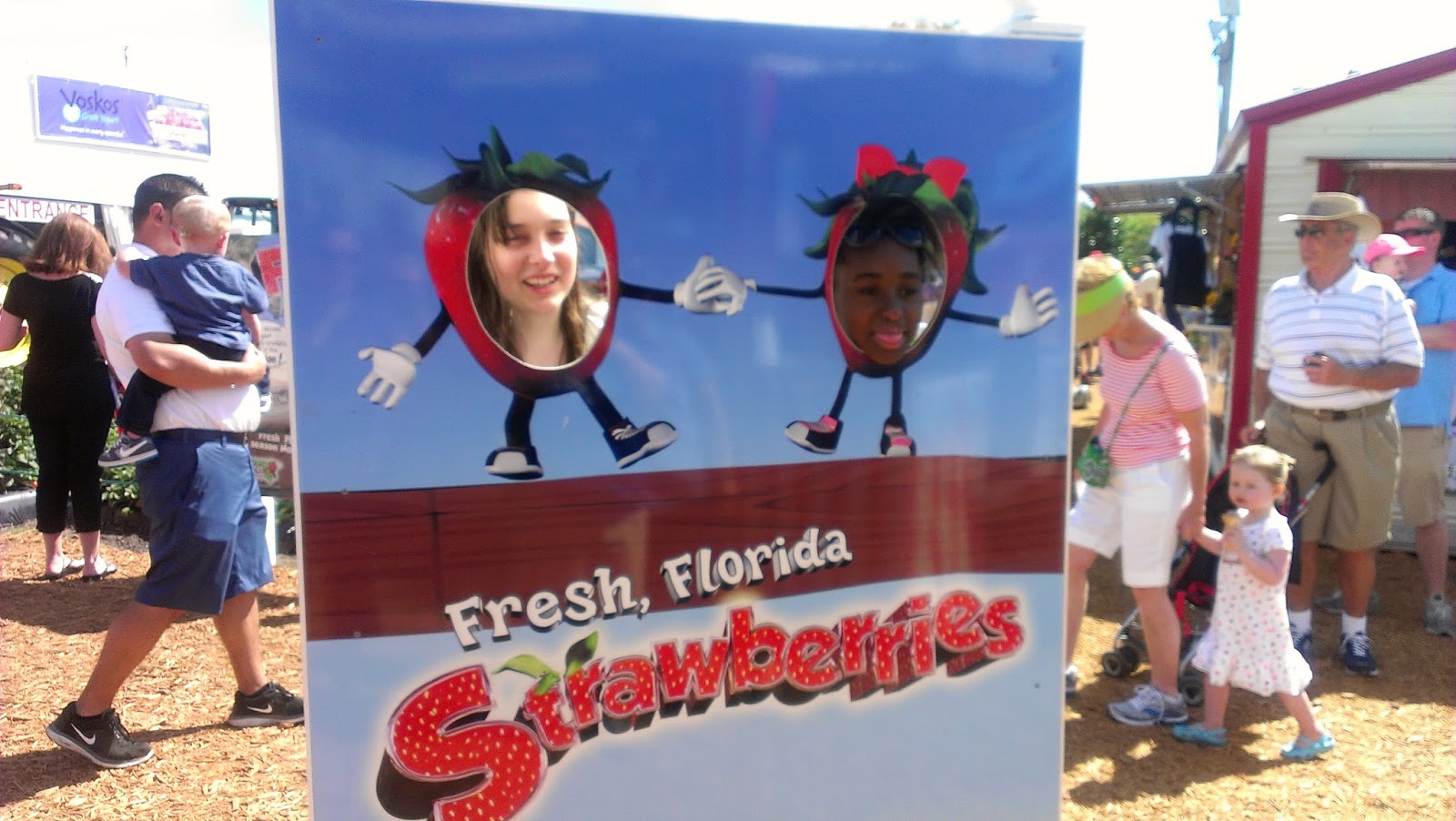 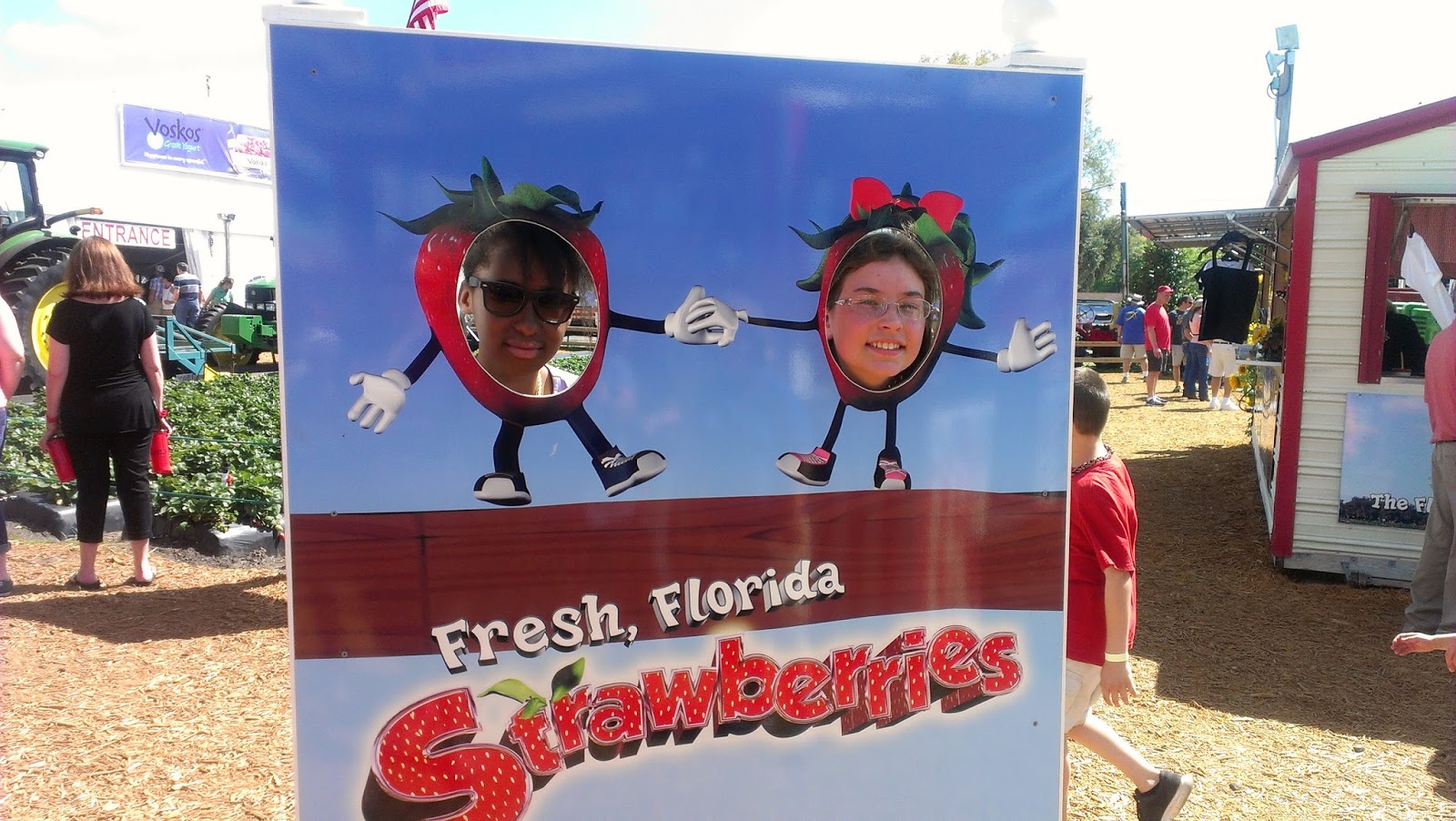 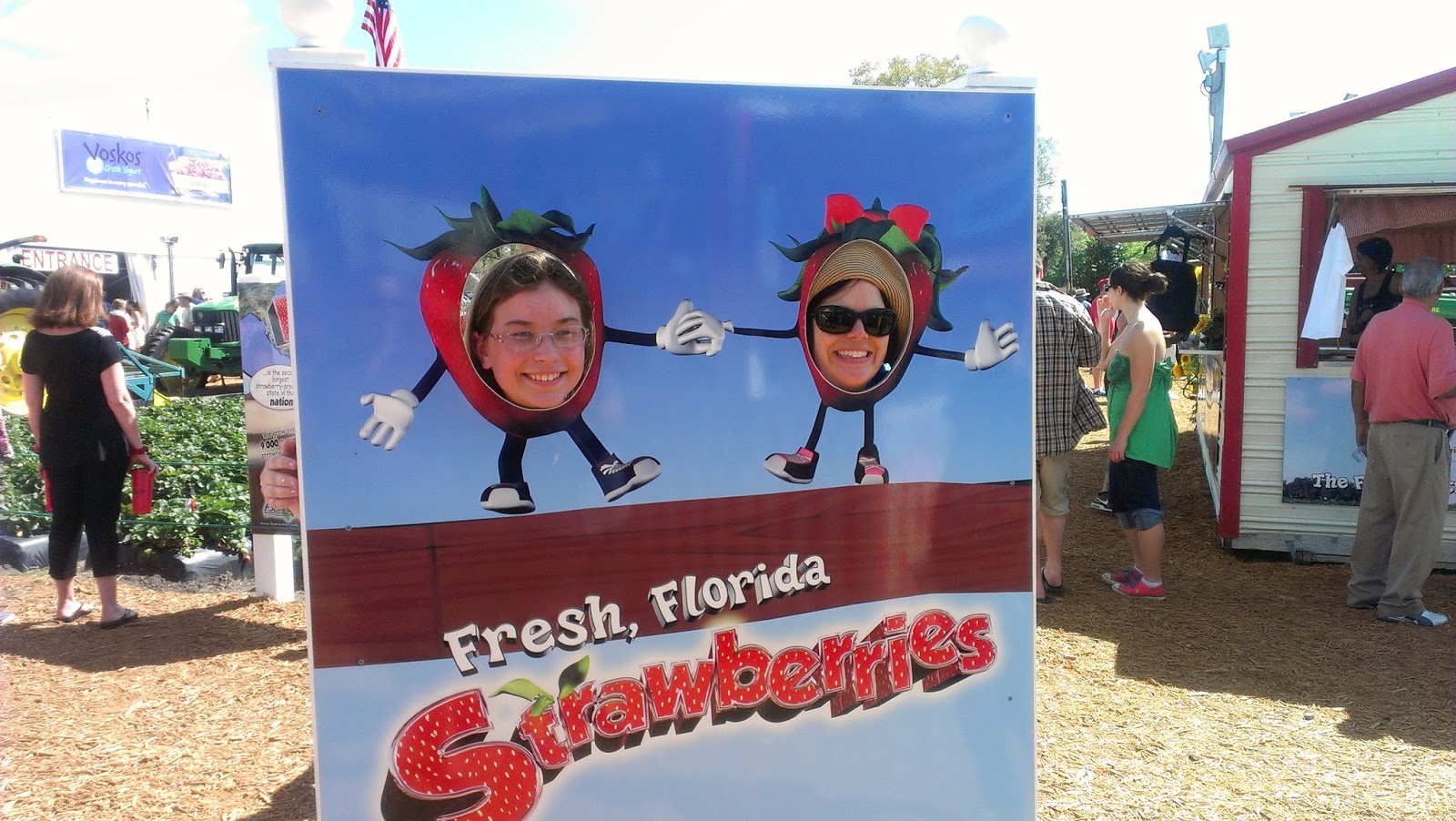 As much fun as we have had on this extended vacation of ours, the hardest part is missing  our friends. For me, it is one thing to talk to the people who are important to you, but it is sooo good to see them in person, and spend time with them. This trip has allowed me to have that, with people I haven't seen in years, and I am grateful for that. I am also looking forward to seeing the friends I left in Albany. Chats over a coffee cup are good, but so much better when that cup is in the same zip code. So we still have some time left for fun in the sun, but I am  also looking forward to the time when we get to see our NY friends again.

A Visit to the West Coast...of FL

For me, this is memorable beaches, where I spent evenings watching the sunset, making sandcastles, and digging for coquina in the wet sand along the shore. Actually, I don't think I really spent so much time at the beach, as I was growing up, but it is what I remember, perhaps that is because it was always fun, and relaxing. Though most of all, since it has been so out of reach, it is what I miss the most. I had a blast sharing this with the girls. Fun in the sun, and the sand, looking for shells along the water. All that was missing is the bucket of fried chicken. Instead, we made a stop at what I think is my favorite pizza joint, where the pepperoni is crispy and curls up into little cups on top.


It is memory lane: a drive by the old house(s) where I spent my childhood, and the elementary school. Interesting, but I find no longing to return. I have great memories of my childhood, but that was then. I enjoyed my time, but I don't wish for those days again. I like where I am, and what I have now. I like the changes in myself, and what I have done, and I look forward to whatever lies ahead. So it was nice to visit to some old haunts, but I think visiting is all I want to do. My future lies elsewhere. 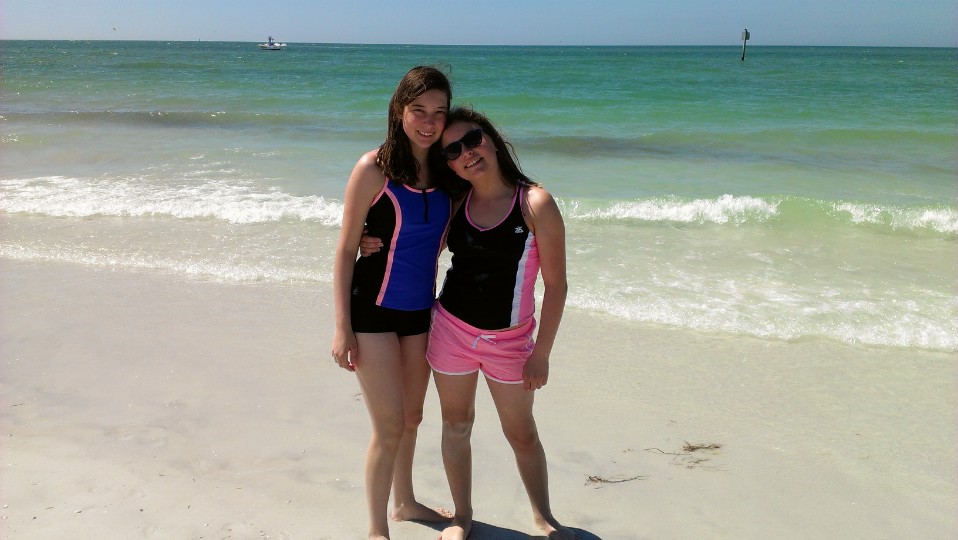 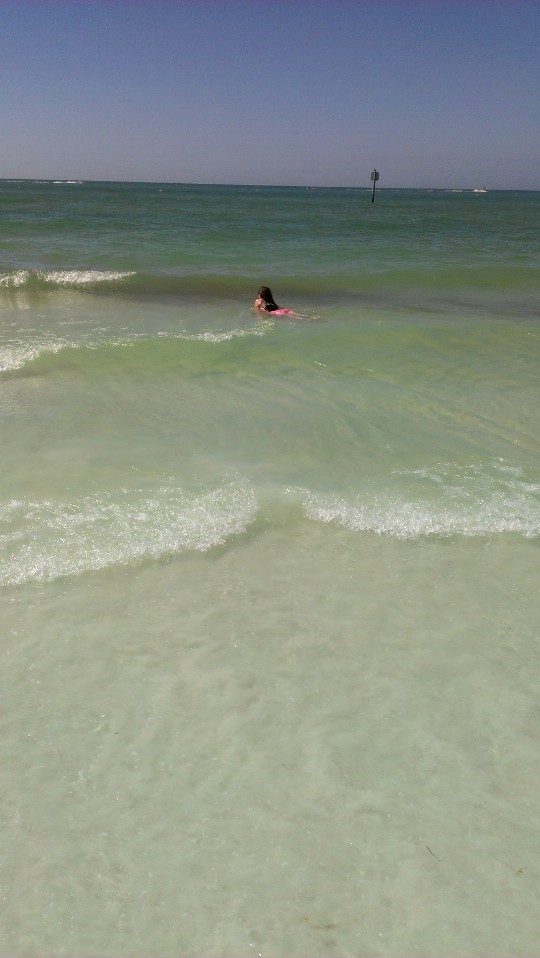 I was contemplating where to find a car wash, as the pollen and lovebugs on my car were reaching a critical point. Then I was driving home in a thunderstorm. Good enough for now.

We got to spend the weekend having fun in Tampa, with friends. There was lots of sun, and plenty of fun to be had! 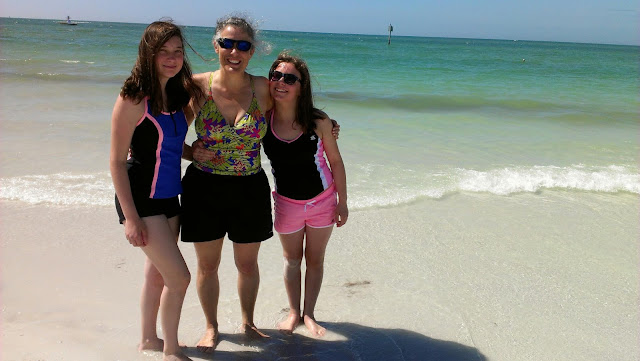 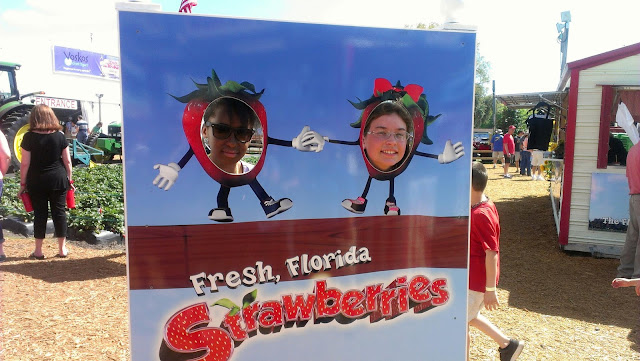 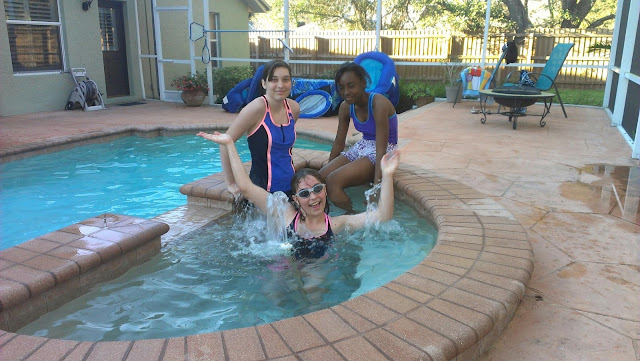