A Birthday and Some Eighties Fun


Atlantic Highlands, NJ, was a great anchorage for us. We celebrated Janele’s birthday, we happened upon a flea market right in the parking lot of the marina, where the girls had fun picking out birthday presents for each other. Janele even got herself a birthday dress at a vintage clothing stall. She had a blast shopping (she must get that from her aunts).


We spent almost a week there, after coming down the Hudson, and spending a couple days near the Statue of Liberty. It was going to be a long day to our next stop in Atlantic City, so we were waiting for a weather window where we could take advantage of the winds, and get there while it was still light out.


So we lifted the anchor early September 13, and headed south for Atlantic City. We motored much of the way, but also got to put out the sails and give them a trial run. This was the first time we had been able to use them since bringing FORTUITOUS to Albany from RI in June. It was quite an effort, and I am sure there were some expletives muttered, or maybe shouted, as the in-mast furling got all hung up, and it took forever to get the main out, but out they came, mainsail, mizzen and genoa.


Man, those sails are big! It is no small task to set them out, or bring them back in. It is all hands on deck, and it really takes effort and all of us working as a team to make that happen.  We bought this boat thinking Fowler and I could handle it just the two of us, but now I am not sure. To get those sails out, one person has to be at the helm, keeping the boat on the right course, and then you need at least two others: to work the main furler (unrolling the sail from the mast) and another to help the sail out, pulling on the other end, as it unfurls. Then it is very helpful for another to be tailing the winch (pulling on the rope, to be sure that the winch is pulling it, not just slipping around). So that is the four of us, a true team effort!


Atlantic City was a weird place to anchor, but we had fun while there. We stayed a couple of nights, visiting the Golden Nugget, the girls both said it reminded them of the cruise ship we were on in July. Yep, that was about right, all flashy neon and sparkles. Not at all what we have been living in the last few weeks on FORTUITOUS. As we walked in the first time, Janele’s words were, “well, this is grand”. That pretty much summed it up.


We didn’t gamble, but I did have to go into the casino to get quarters for the laundry machines. We were treated to the sounds of live entertainment each evening, from our anchorage. One night we decided to go ashore to see a band, Weird Science, which was total ‘80’s revival. Never mind that no one in the band was even a thought in the eighties, they were pretty good. It was a fun night, and it took a while, but Janele finally joined me dancing by the stage (Thia preferred to watch in ‘tween embarrassment from our table). Janele was enamored by the lead singer (who was often in one Madonna getup or another, no cone-bras though). During their break, she made sure to go and say hi to “Madonna”, and after the show, she was elated when the singer gave her the flower bouquet she used in her “Like a Virgin” number. That’s my girl.


We also made sure to visit the Aquarium there. It is not a big, exotic place, like the casinos on the other side of the inlet, but it was fun to visit. We got to pet sting rays and sharks, and look at lots of animals from all different environments. Then of course, we visited the shops along the boardwalk. Thia found a really cool 3D kind of print by a local artist. She is decorating her stateroom in all manner of beach and nautical themes.


A couple of nights in Atlantic City was plenty for us, it was a less than calm anchorage, and we were ready to move on, to Cape May, NJ, home of the US Coast Guard. Also, we were going to need to find a grocery store soon. There really are none near all the casinos in Atlantic City. Go figure!

Some photos of the journey so far:

We could have changed the name, when registering with the Coast Guard, but that would mean removing those awful letters from the sides, which, it turns out, would cost more than we want to spend on cosmetics. We are watching every dollar we spend, preferring they go to travel, rather than worry about a name? FORTUITOUS. It’s not that bad. Right?


Fortuitous is not quite accurate, though. It does have something to do with fortune, but it is more fortune through luck, or chance, like we won the lottery and decided to buy a boat with it. That is not right, we have sacrificed, and worked hard over the last 5 years to buy this boat and start this adventure. Are we fortunate? Yes, in so many ways. Definitely, but fortuitous? Not so much, at least not how I see it.


Five years ago, (early 2008) we had a revelation in our own family that something needed to change. Like so many others, we had bought too much house, and it seemed we were spending all of our time and money working to keep up this fantastic, historic home, that we didn’t get to enjoy because it required so much of us. We needed to change our lives.


I have chosen a partner who tends to have big ideas, and we don’t do anything halfway, so we (well, I took some convincing) decided that spending a year sailing around the Mediterranean would be a good change. Yes, it would, but making that happen would be hard work, and require a lot of compromise and creativity.


We sold our home, finally, it was on the market for almost 2 years, which in turn pushed back our departure date by a year, and instead of buying a boat in Europe and sailing the Med., we bought a boat in RI, and are setting out to sail the East Coat of the US, and into the Caribbean. We did not find these delays and hurdles fortuitous.  But, we are persistent and dedicated, and though this is not the original plan, it is not a bad second.

In the meantime, we have all become quite good sailors, learning about sails, rudders, tillers, winches and blocks, also woodworking, wiring, fixing leaky hatches, windows, and whatever else is leaking, recovering cushions, repairing and maintaining diesel engines, I could go on for a very long time. There is so much more, and we haven’t even left yet!

What may be the most important lesson I have learned so far (and it has been a slow progression for me) is that I can do things, and I can mess them up, then I can fix them. This is huge. As one who has spent much of life trying to not get things wrong, I now see that it is okay to do just that. I can figure out what is wrong, and fix it, or ask for help to fix it. Everyone gets things wrong sometimes, and that is where much of the learning happens, in the fixing. Of course, I have always known this, but to apply that to myself and what I do is something new and fortunate.


Perhaps there is something fortuitous in this adventure we are on? I am willing to give it a shot. 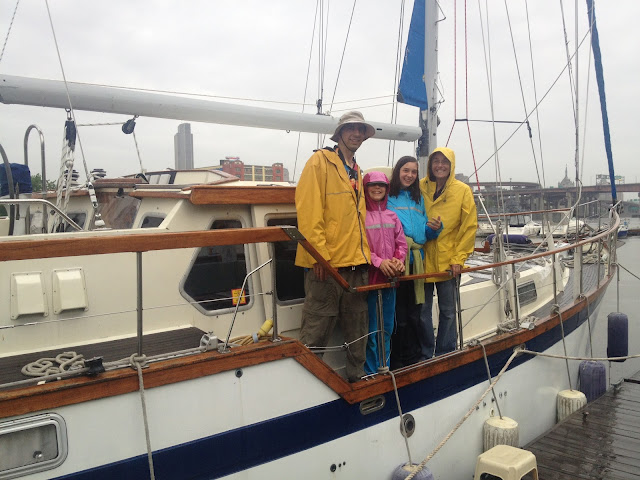 The Fowler Family arriving at the Albany Yacht Club in early June, 2013. It took 1 week to (mostly motor) FORTUITOUS from Portsmouth, RI to Albany, a trip we can drive in 3.5 hours. What an education that one trip was!
Posted by MB at 6:10 PM No comments: