This is what's left of the impeller on our seawater intake. Replaced now, and engine is working. Hopefully that's the end of it. You think? 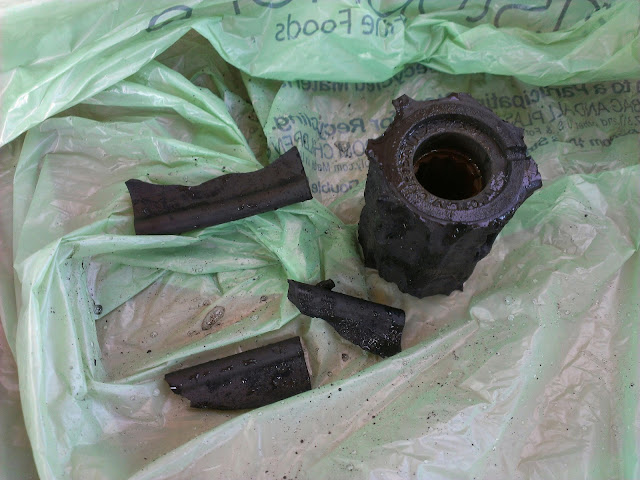 Racing Our Home, One Last Time

Last night, we raced Fortuitous one last time. Endeavor was still out being repaired, so the crew joined us for the fun. The first time we did this, Mom and Dad were aboard to help. Unfortunately, it was incredibly hot, and there was not a lot of wind, so even though it was fun, it was also kind of miserable. This time we had a great race, but did not technically finish in time. Oh well, it was fun anyway. We got to fly the chute again, and that is always a rush!


Of course, there is always adventure when we take FORTUITOUS out, and this night was no different. It was getting dark, and time to head back to the docks, we had an after party to get to! I fired up the engine, and the sails were coming down. It was not long, and my control panel started beeping at me. The engine temp. light was on. I went into the engine room, and saw smoke coming off the muffler. Time to shut down the main engine. It is really a good thing we have a sail drive on this boat, as it has saved us more than once. I had thought my biggest worry getting in tonight, was making sure not to run aground, as we would be coming back at low tide, a tenuous time for us, given our deep draft. Add to that an overheated engine. Weeeee!


Now I had to get us in on our sail drive. This little engine was never meant to drive the boat. It is a glorified generator, and now we needed it to guide our 55,000 lb vessel, with all of our crew (and of course everything we own) aboard into dock. And it was now night. Dark. With a brewing storm in the distance, though its lightning was actually helpful in my sighting the channel markers. I will say it was better than seeing a drifting boat in the flashes.


Fowler and Steve headed into the engine room, while I guided us into the channel. Thank goodness for all the people aboard. It was now totally dark, and everybody was shouting at me, helping to keep us on course, and away from the shoaling and shallow areas. Every once in a while, someone would say, "are we moving at all?" and my heart would drop, I was so paranoid of running aground at low tide. Fortunately, we were just moving very, very slowly (heavy boat, tiny motor). It took a long time, but we got her in and touched right up to the dock. In the meantime, it was determined that something had stopped up our intake on the main engine. This is fixable, we know from experience, and should not be a great expense, possibly even just a minor pain. Also, we had plenty of food and drink aboard, so as I guided FORTUITOUS in, we were able to have our own after party. Fun!


I know some people were worried about returning so late, but there was nothing we could do about that, and we all got in safe and happy, with yet another story to tell!


I am sure it was a birthday Fowler won't soon forget!

Some More Photos of our First Race

For our first race on FORTUITOUS it was hot! There was not a lot of wind, but we still did pretty well. We got her moving over 4 knots with the gennaker out. Though we finished DFL, we still finished, and there is something to that! We had the entire crew of Endeavor to help us out, and even more special, my parents were visiting, so they got to help with the race. I am sure that is an experience they never had before. ﻿

Memorial Day Weekend with Friends, Old and New (this one is overdue)

When we first started planning this trip, in what now seems like a former life, one of the most exciting things for me to think about was having family and friends visit us on the boat, wherever we were. As planning went forward, we started to realize how hard it would be to plan visits. Dear friends told us they wanted to come see us for Spring Break, where would we be? Well, we couldn't answer that question, and if you are flying from New York to anywhere warm for Spring Break, you don't want to purchase your tickets at the last minute, if you can get them at all. I mean we are good friends, but I didn't want to send anyone into bankruptcy for a visit.


As it turned out, with the way this adventure has played out, it was good that nobody bought tickets to meet us in The Islands at a certain time. We never made it there! And although I am sure a mid-winter or spring vacation in the Islands would have been wonderful without us there, I like to think it would have been just a little disappointing for them.


This is not to say we did not see friends, and when we did, it was great. I think I have written before that as much fun as we have had, and new experiences, and meeting new people, the hardest thing about this trip has been missing our friends. So whenever we had the chance to visit, we took it. Sometimes spending a few hours in the car, just to spend a day with those we had left in NY.


When we came back to the boat, here in Annapolis, that put us much closer to our home in Albany, and we knew we were staying put, until we head north to rejoin reality. So we, finally had our first visitors to stay with us on FORTUITOUS! The Allen family came to visit over the Memorial Day weekend, and it was a blast! There couldn't have been a more perfect weather window (okay, our heavy boat could have used a few more knots of wind for the sailing), it was sunny, and in the high 70's, and even the water in the bay was warm enough for swimming (the kids, not the adults)!


Saturday after they arrived, we unplugged the boat, and took her out into the Chesapeake, we sailed to an anchorage just north of Herring Bay, the Rhode River, where we had anchored once before. It was a beautiful day, and an easy sail up there. We got in early, and that was good, because the anchorage was filling with boats. Later that evening we were joined by the owner of Endeavor, the boat we help race, Steve and his wife Beth. We rafted up, tying their boat to ours, and had a proper dinner party, with lots of visiting and fun.


There was swimming, paddle boarding, dinghy-ing, and playing on a sand bar lots of food and Beverages were consumed, and we all slept well "on the hook" in a calm anchorage under a beautiful moon. The kids were beside themselves with excitement at all there was to do, and all the catching up from so many months apart.


The next day, Steve and Beth headed off on Endeavor, and we eventually brought up the anchor, heading back closer to our dock. Though we anchored another night, just outside marina, enjoying the gentle rocking you get while on the hook, in a protected bay, in calm. Though we wanted to be close, so we wouldn't be rushed the next morning to get back in time for the Allen's to make their drive home.  There was time for more swimming, paddle boarding, dinghy rides, and checking out the local beach. Then we had to pack it all up, and raise the anchor once again, this time heading toward another goodbye.


It was a wonderful time, and we all appreciate them making the trip (I do not envy the holiday traffic), and it was hard to say goodbye. I know we will be back soon enough, and see them, and so many others we have missed over this last year, but sometimes it is hard to bridge the gap. I guess until then, perusing photos will have to suffice. 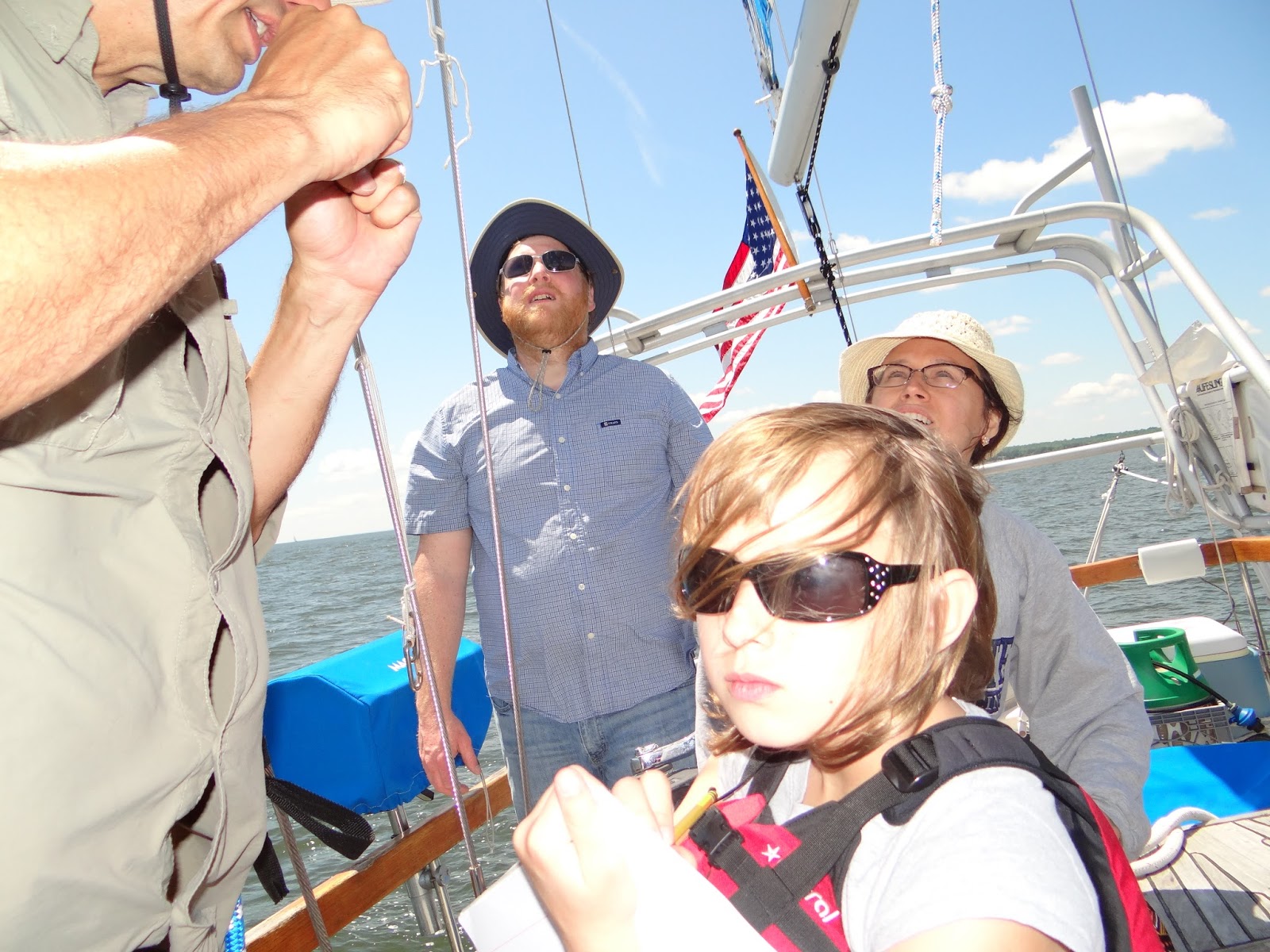 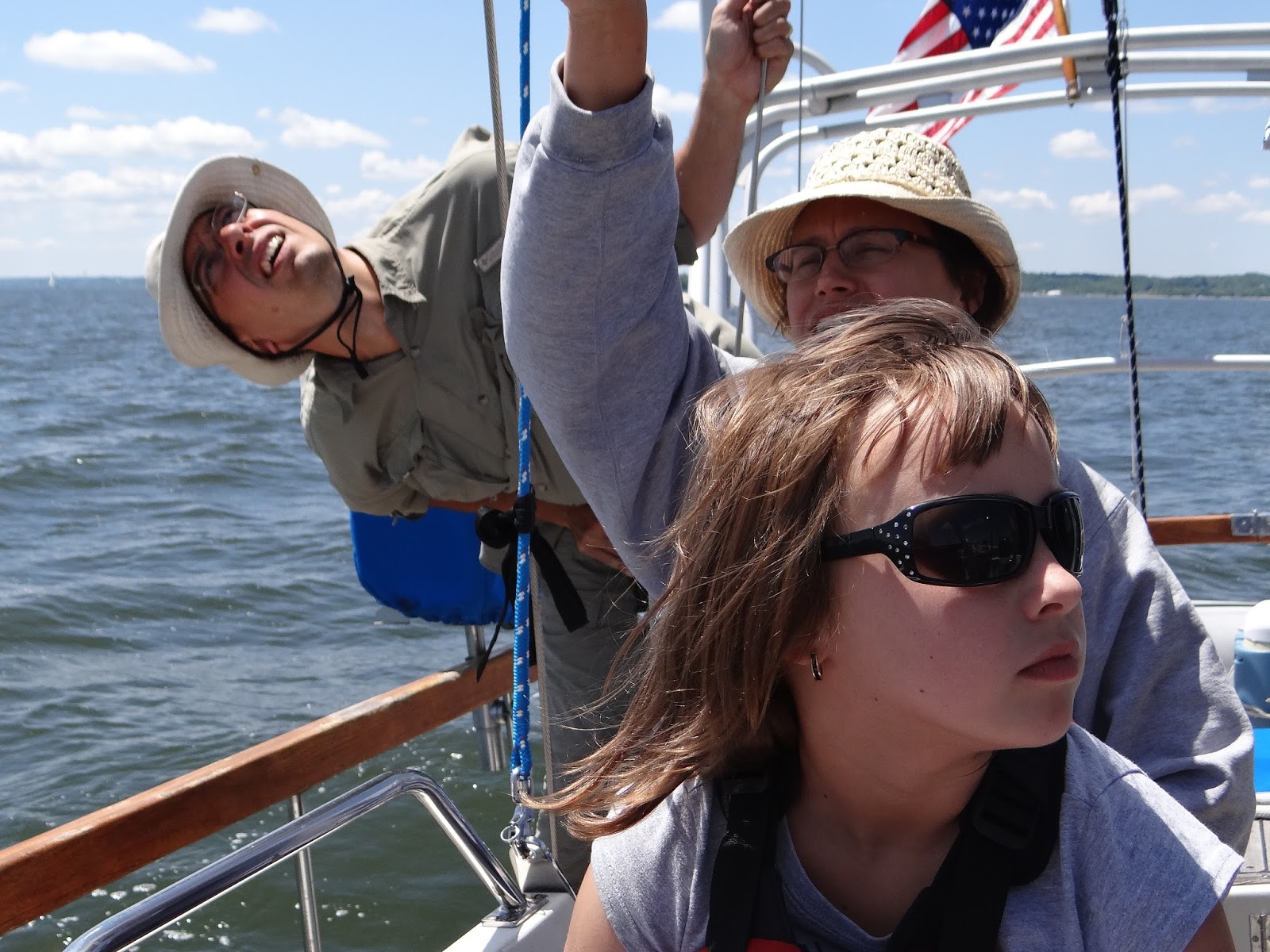 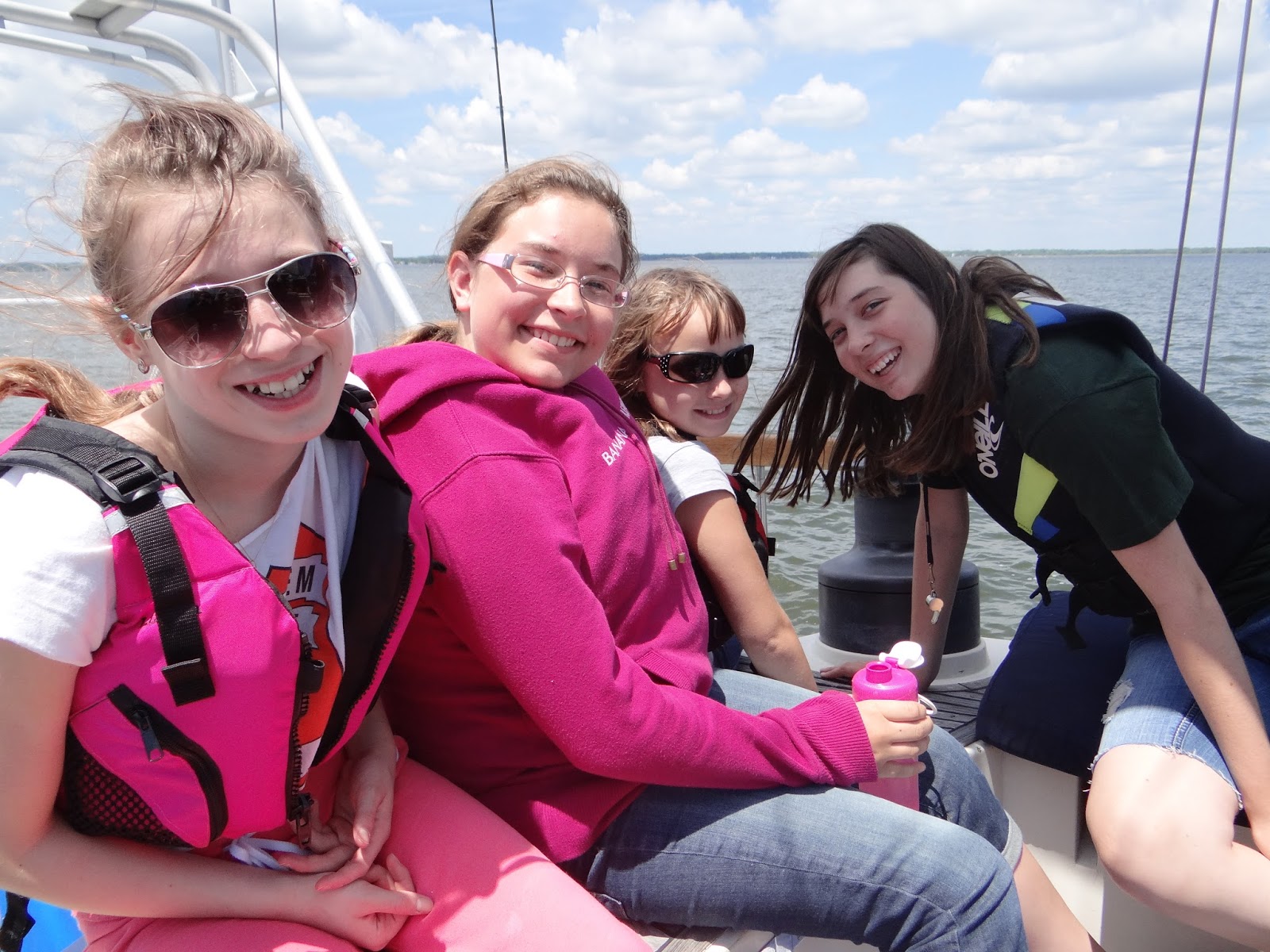 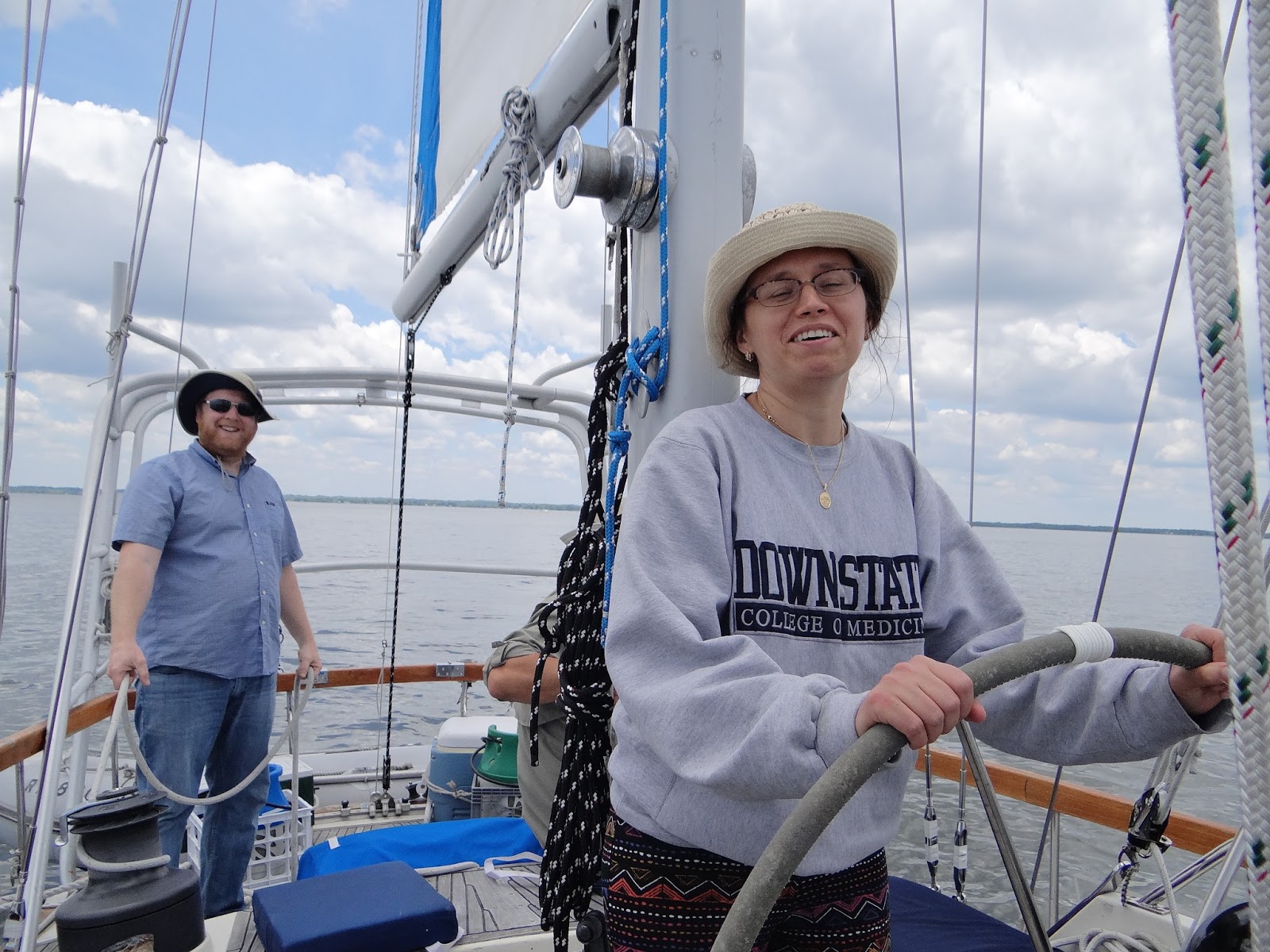 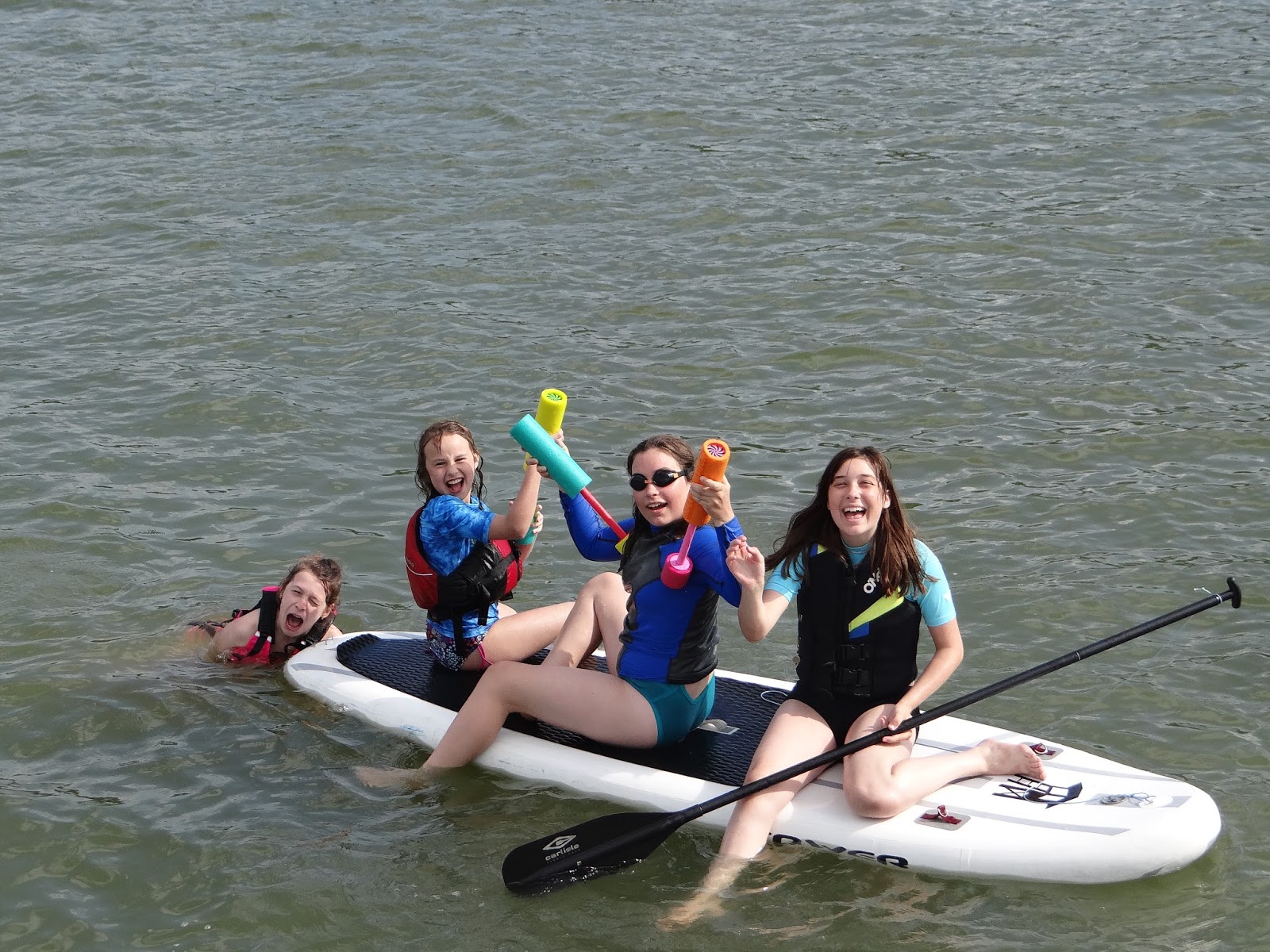 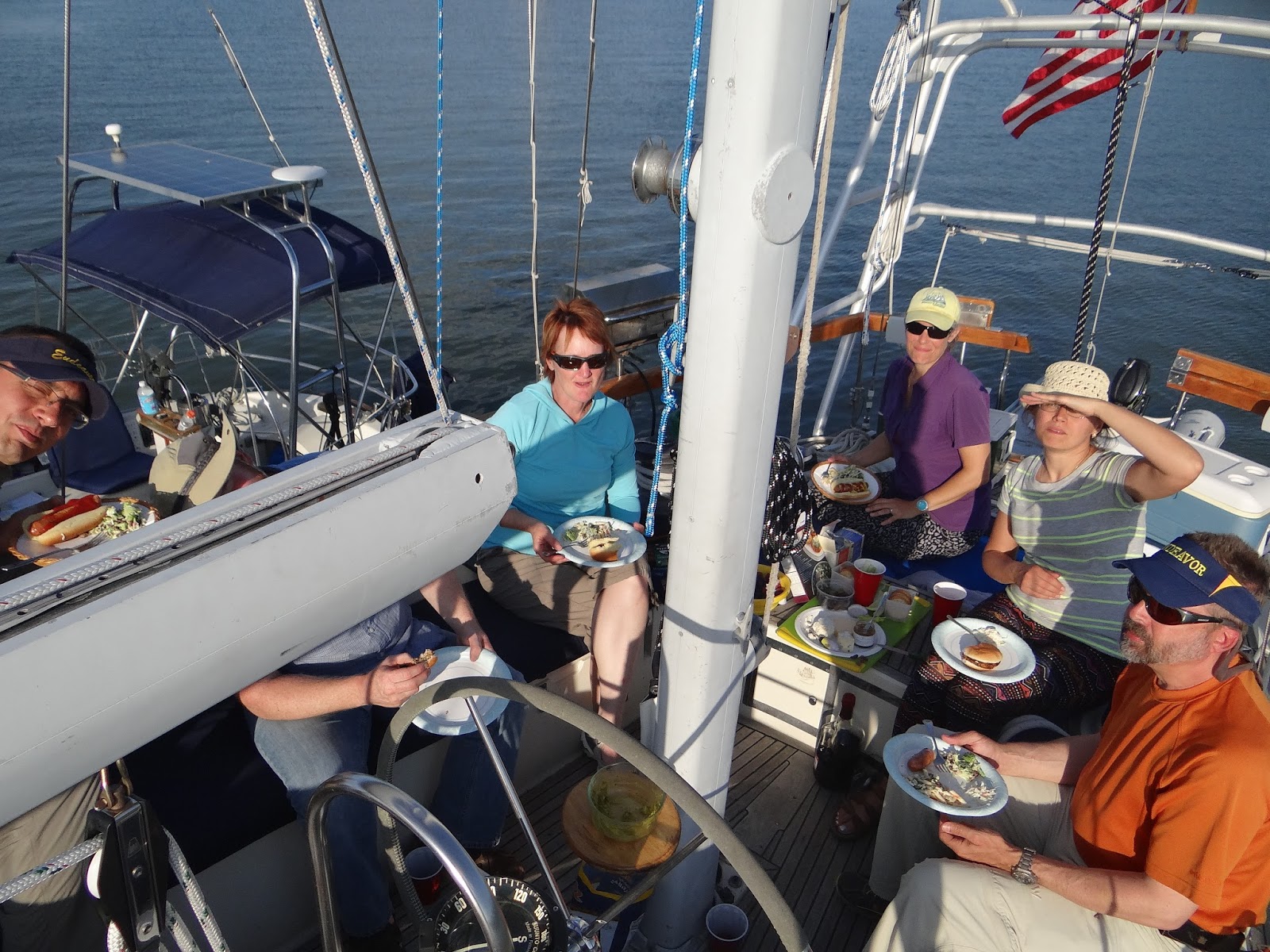 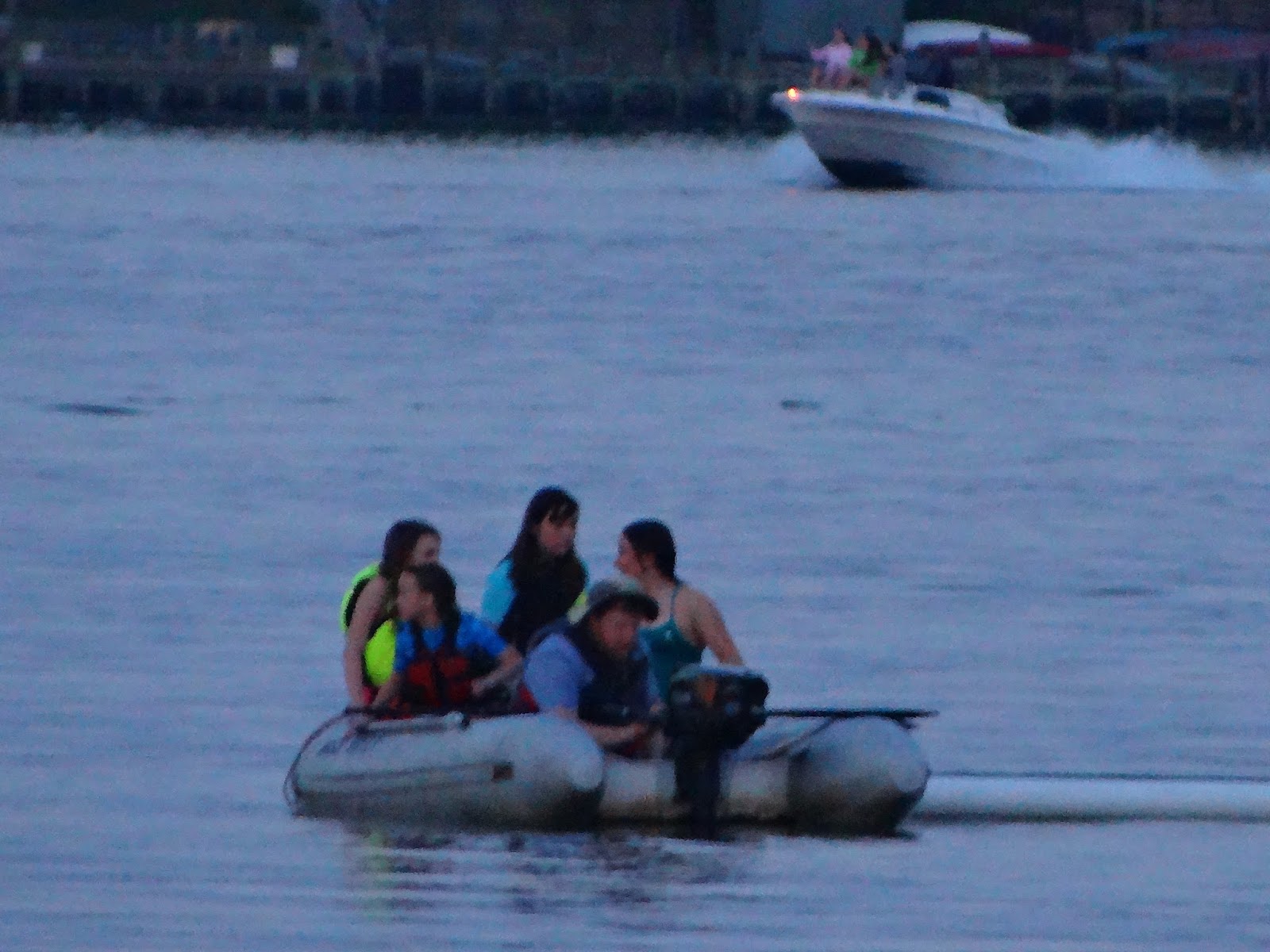 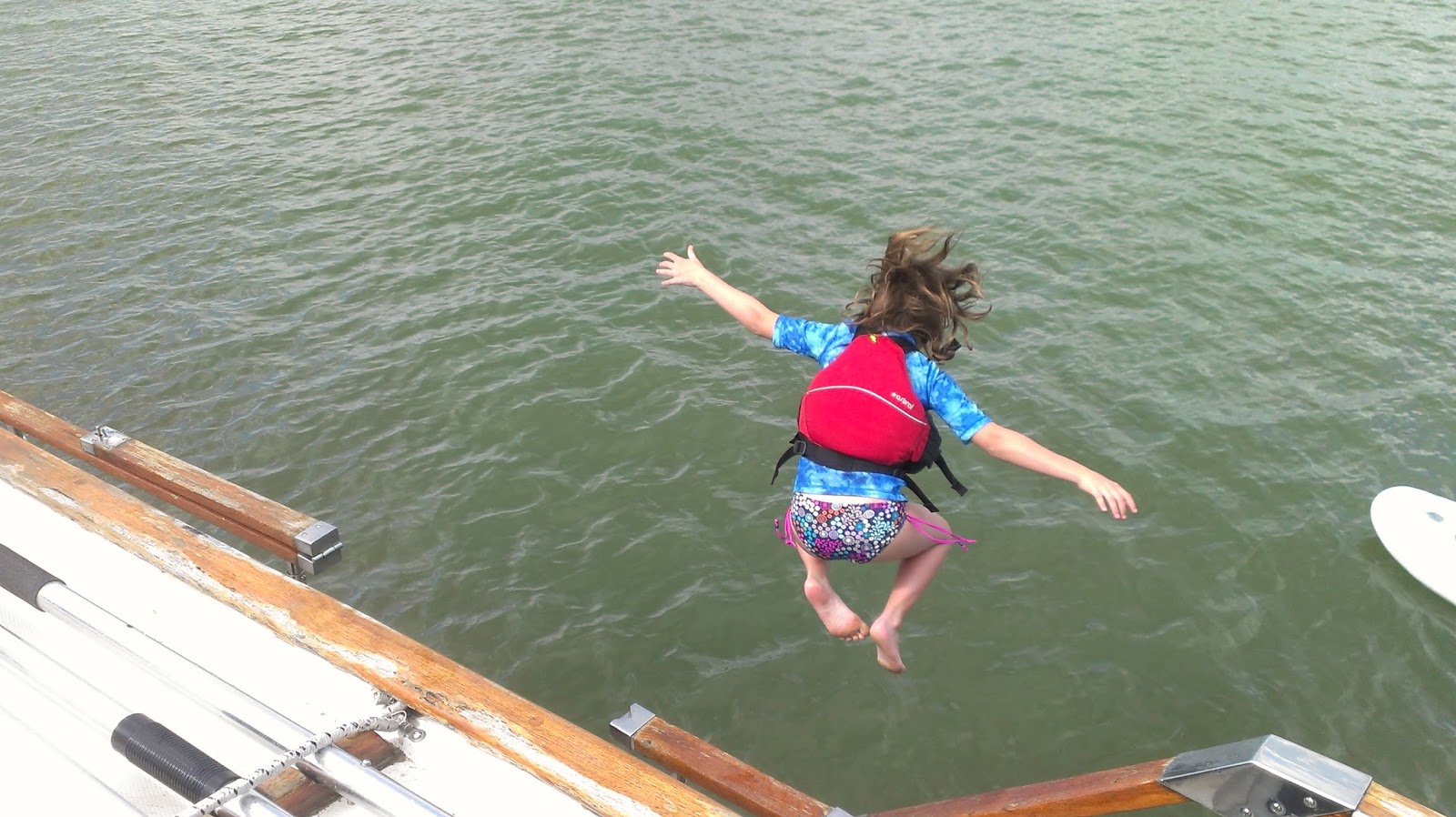 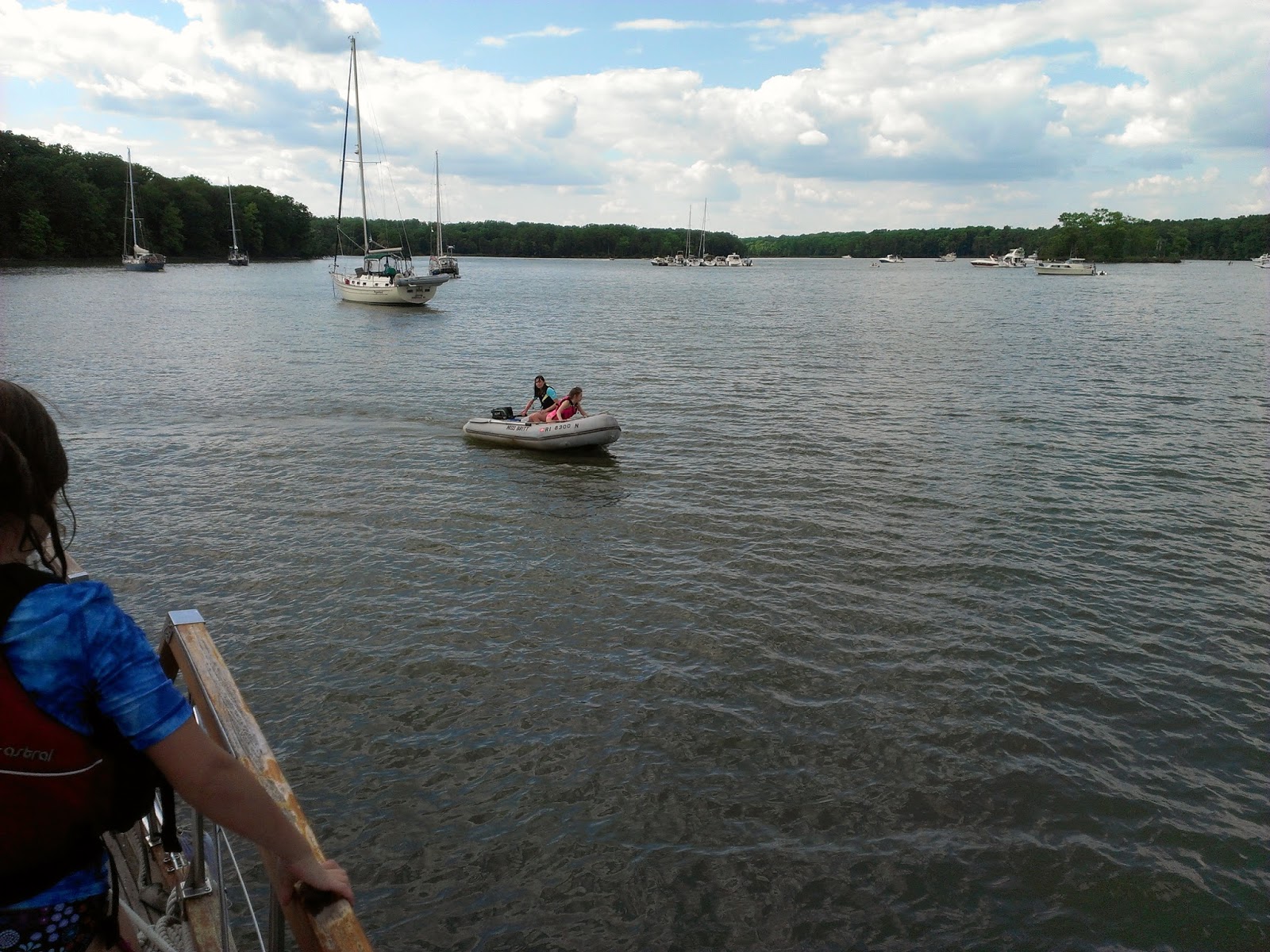 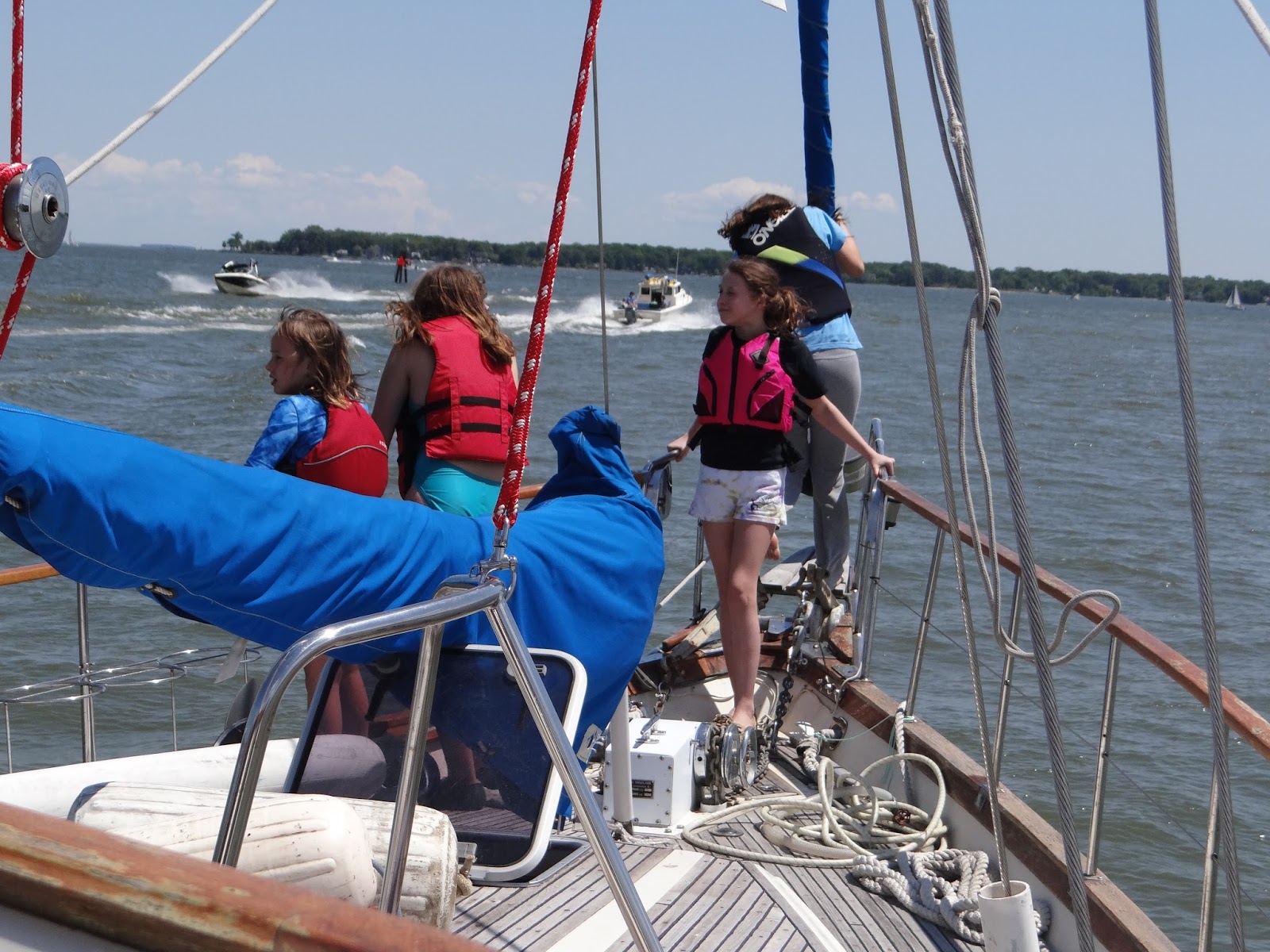 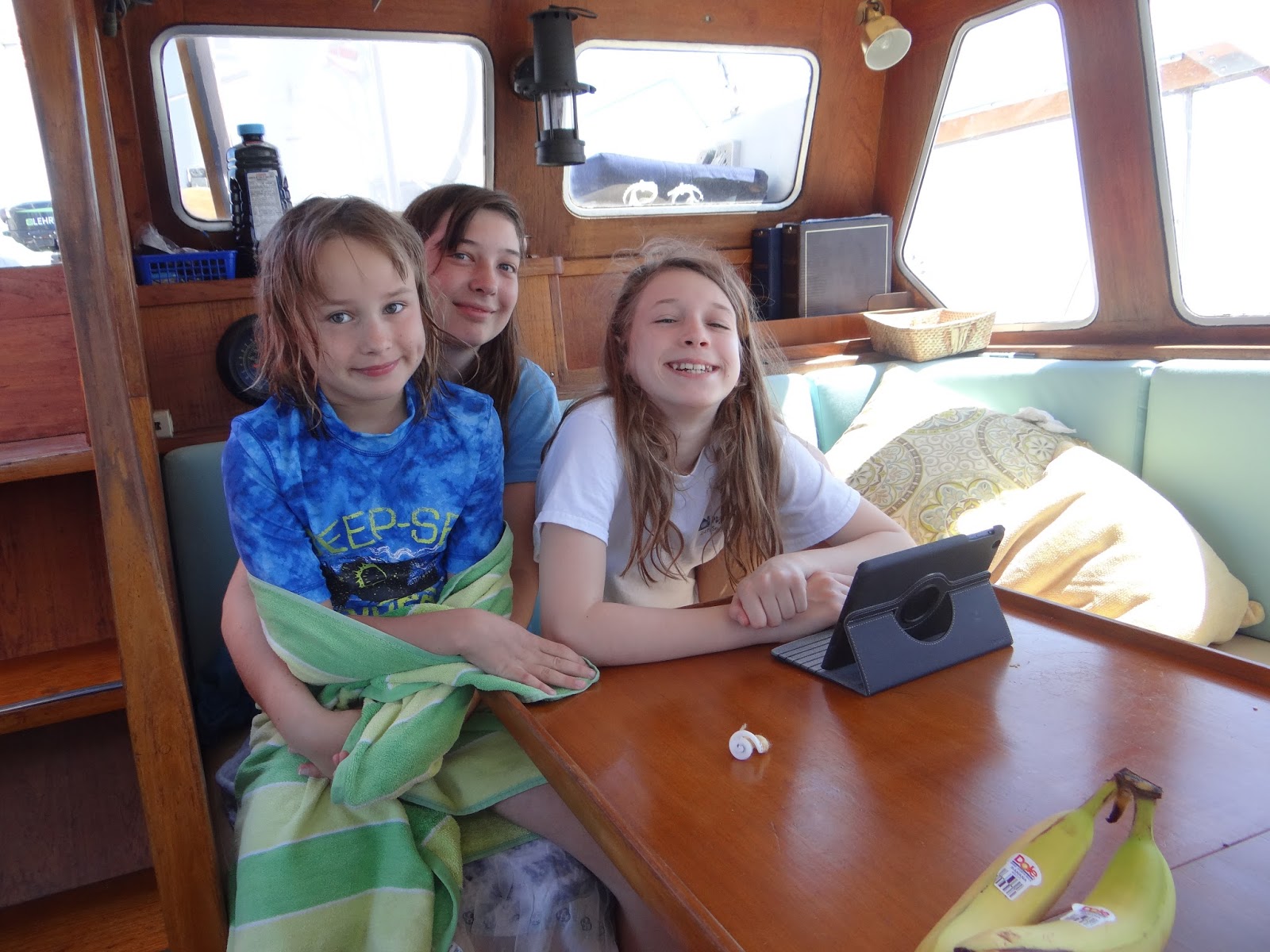 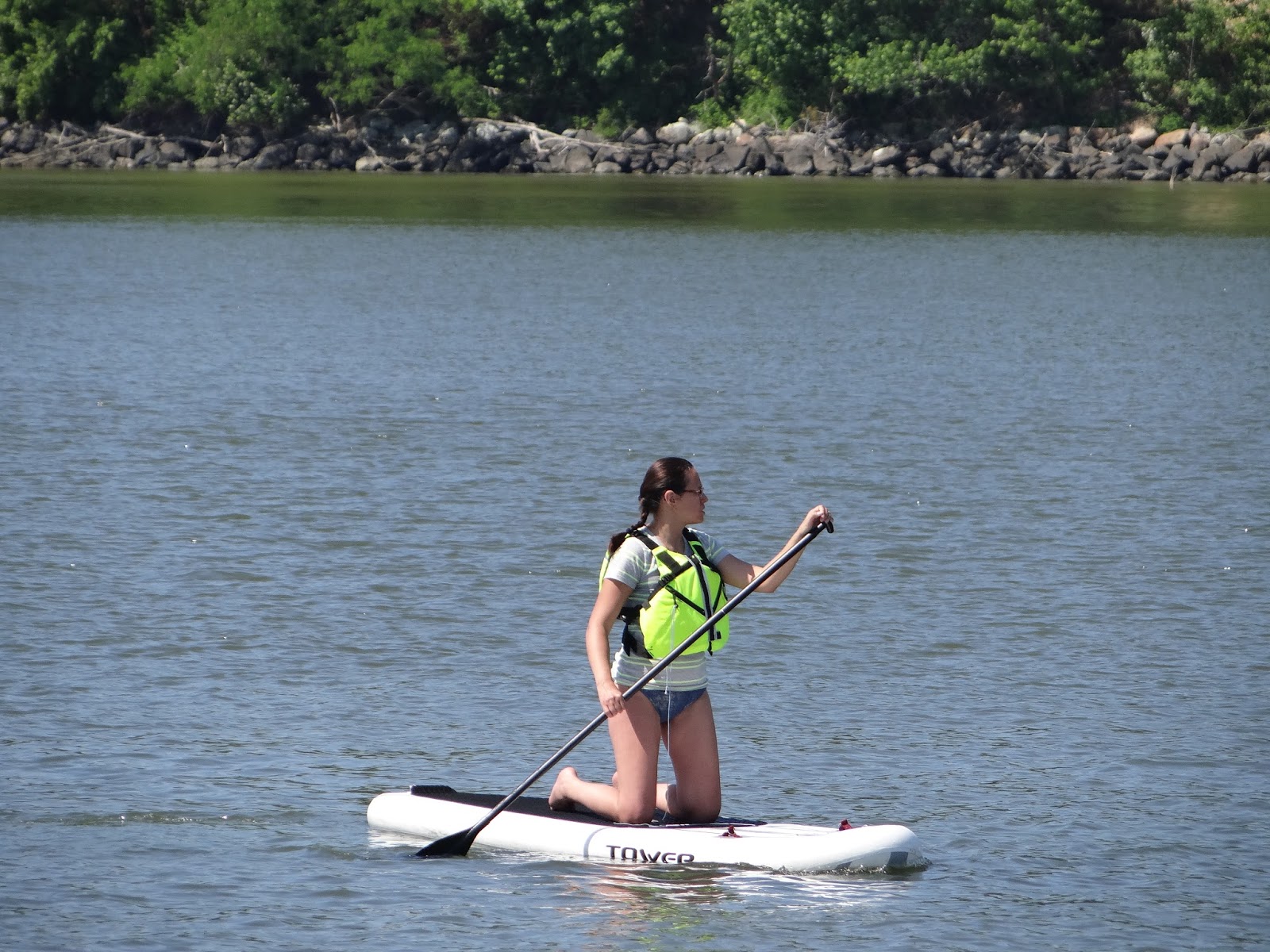 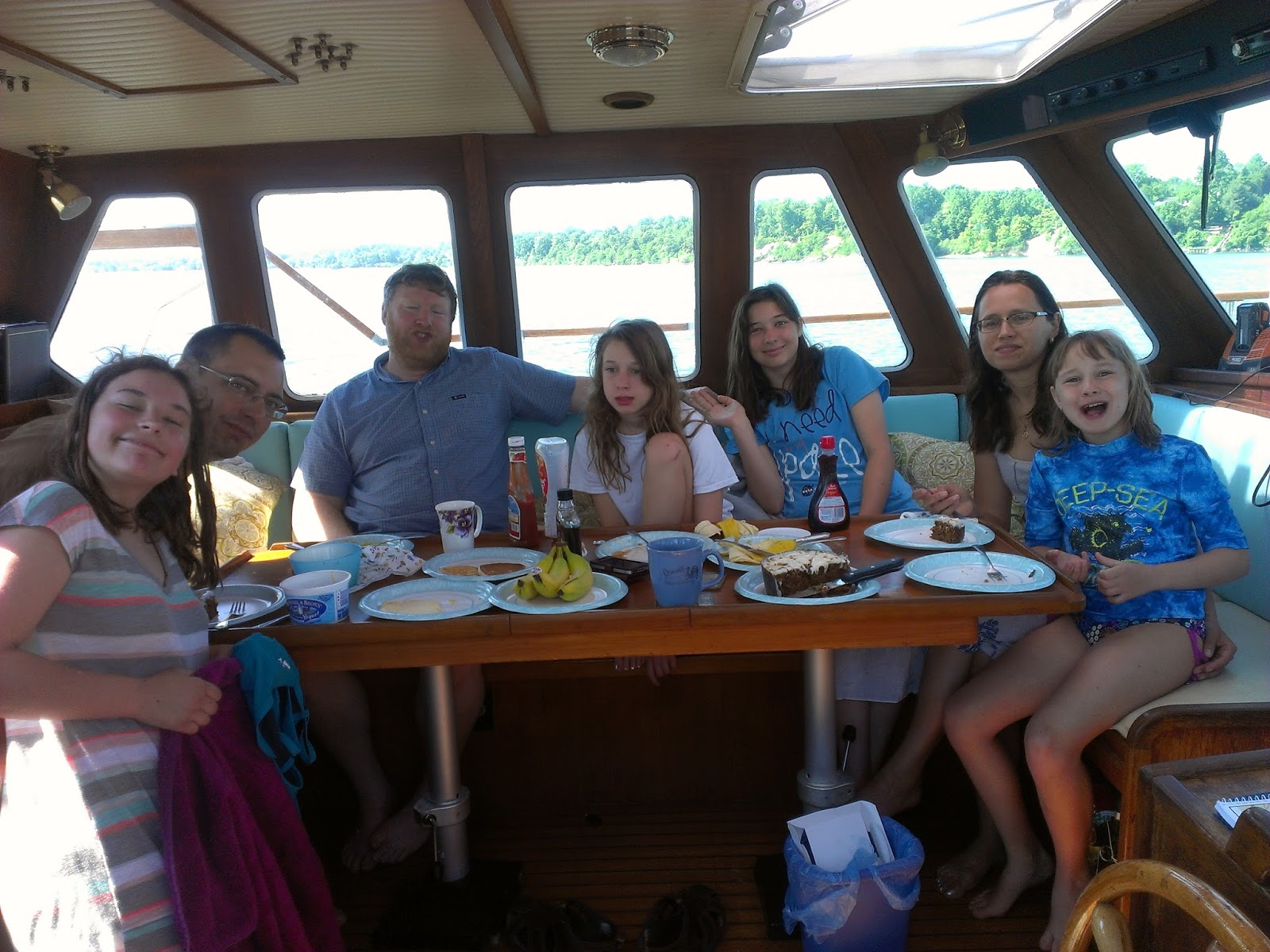 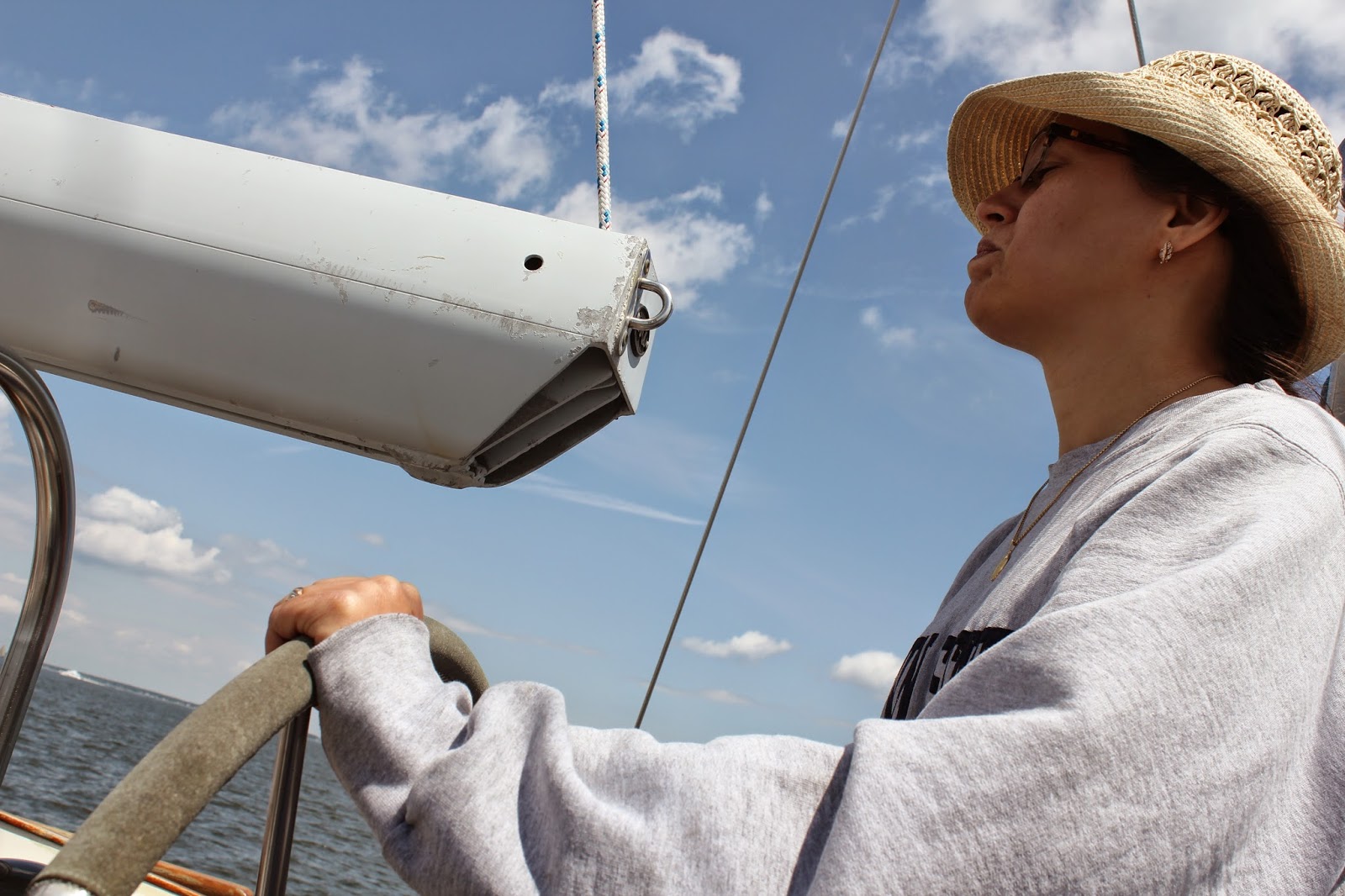 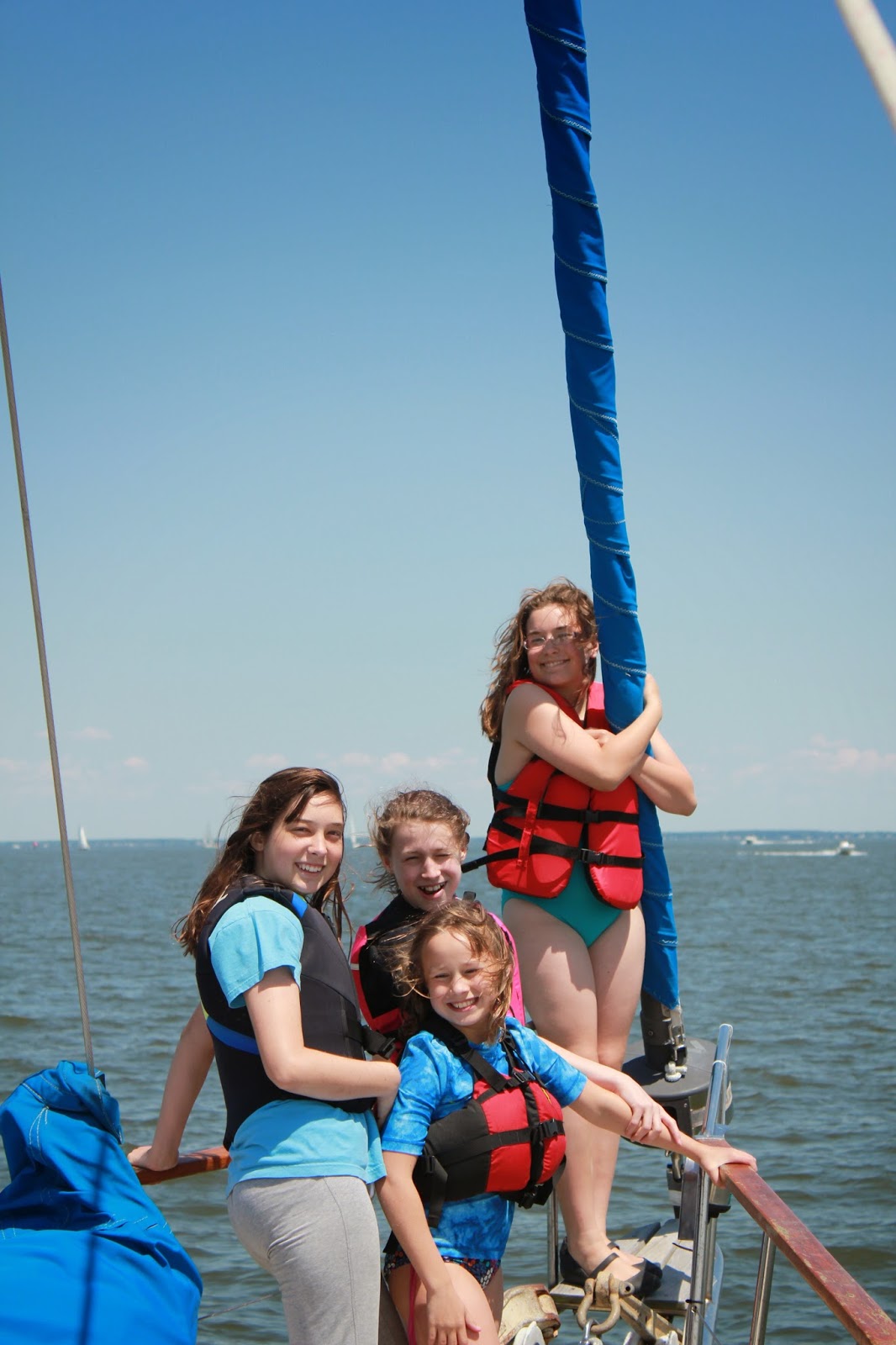 Yay! Someone from the race committee got a couple of photos of us from our historic Wednesday night race. Fortuitous led from behind, but no matter, we got to fly the gennaker! Isn't is pretty?

I am counting today a lesson in economics: the girls are painting the pergola of their fabulous vocal teacher, in exchange for private lessons.

It turns out they are good painters, and now that the oppressive heat has broken, this is a pleasant way to spend Friday. 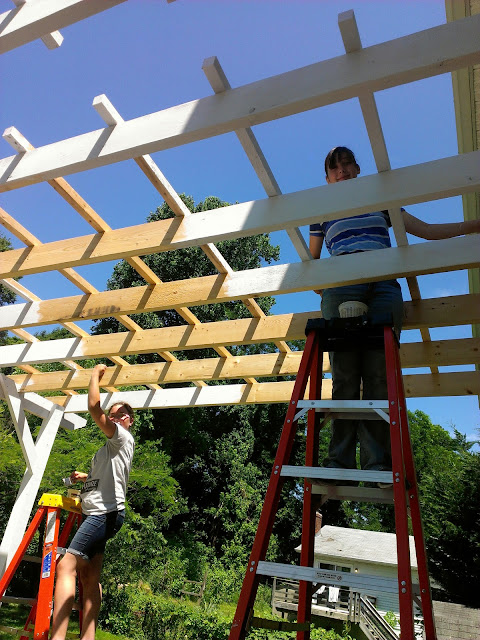 This evening, we got to see an amazing lightning show. I thought it was a lot of heat lightning, more than I'd ever seen.

It turns out it was more than that, about an hour after we went to bed, I was hearing thunder. So Fowler and I headed out to batten things down (no storms had been predicted, so we hadn't prepared), we could feel wind picking up. After the few minutes it took to secure everything, a storm had come up: Fowler and I were soaked.

We stood in our pilot house, listening as the rains fell, the winds kept increasing, and the hail was plinking off the hatches. We heard our dock lines stretching as the winds pushed us as far from the dock as they would let us get. Mom and Dad had come up to offer help. It was quite a storm!

Then as quickly as it had come up, the winds started to die down, rain let up, and FORTUITOUS was no longer stretching her dock lines. We waited a long while, to be sure we really were secure, and the storm died down.

Everyone went back to bed, it was now probably 2 AM. I lingered, not able to settle down. There was still lightning flashing in the distance, and it would light up the bay. I looked out the window, and saw, lit up by a flash, a houseboat 50' off our beam. As my mind tried to process this (did I really just see a boat) I called to Fowler. He didn't come right away, and I called again, when I realized it indeed was a houseboat, adrift, floating toward us! Uh oh!

Sparing the details, we were able to fend it off, then get it to the dock behind us and secure it. There was no one on the boat, I suppose they are in for a big surprise soon, because I don't know where it came from.

I will say this: seeing that boat out the pilothouse windows, lit up only by flashes of lightning, will go down as one of the freakiest sights in my lifetime! 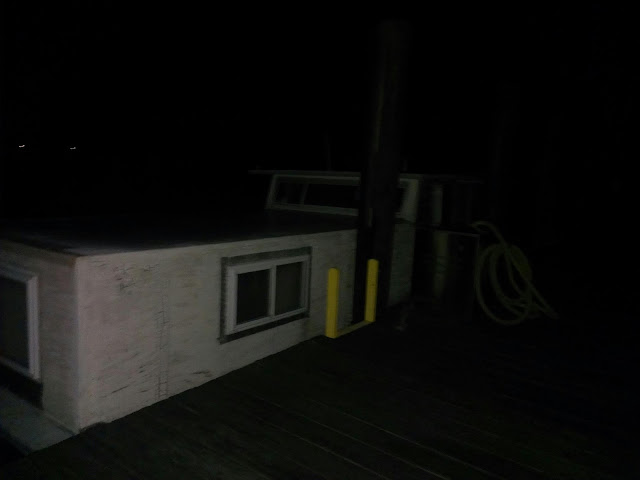 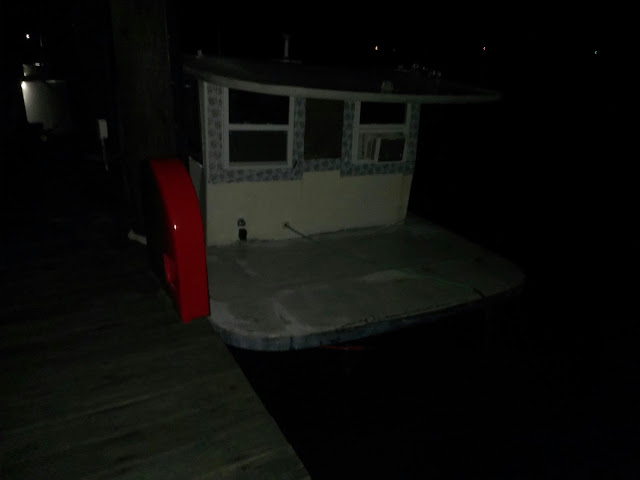